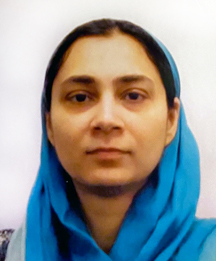 Director: Sister Eisha Kamal Omar is a Rheumatologist by profession. She did her MBBS from Pakistan and has been working in the United Kingdom for many years.

Since childhood she was brought up in a religious environment and understood the importance of Quran being the only true source of guidance for life. Her father and uncle, both translated the Quran according to its grammar in English and Urdu respectively. As her father was always interesting in people who take Quran seriously for guidance, he met Brother Muhammad Shaikh in that quest.

Sister Eisha has been inspired by the true and peaceful message of the Quran narrated in Brother Muhammad Shaikh’s lectures and has been a member of IIPC Canada for the last several years.